It wasn’t until I spent time in Paris that I truly understood how French women manage to indulge in the finest food and wine without gaining weight. The secret? Simple lifestyle choices that can make staying slim seem almost effortless. 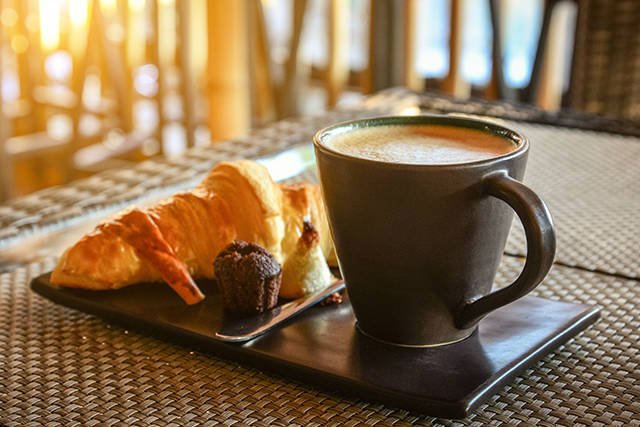 It’s not uncommon for American portions to actually be twice the size of those served in France. Try limiting protein to the size of a deck of cards (cheese, half again), then liberally pile on the veggies. This is especially important when it comes down to desserts—enjoy, but savor in small amounts. You can also split entrees or take home leftovers for tomorrow’s meal. (FYI: The French have a somewhat complicated relationship with “le doggie bag.” Last year, in an effort to cut down on food waste, a law was passed requiring restaurants to provide one on request. Despite attempts to rebrand, the practice still hasn’t been embraced.)

Fast food in the car? Vending machine fare at your desk? If that sounds familiar, it’s time to change up your routine and do what the French do: cut down on the distractions, eat off a real plate, sit at a proper table, and enjoy meals with family and friends. Also take time to plan menus that are not only nutritionally sound, but encompass all the senses—a joie de vivre, if you will. 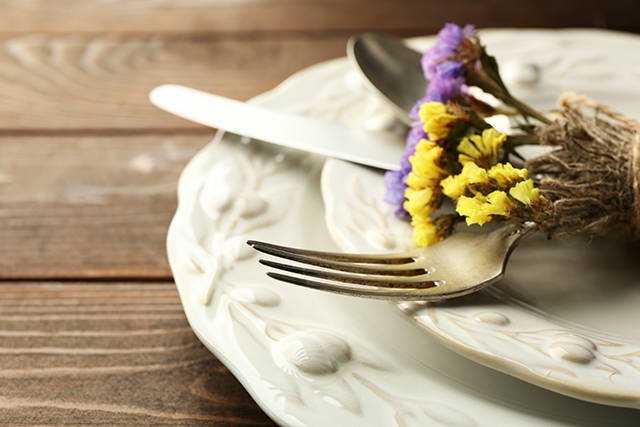 More than just uber-Instagrammable, markets are the perfect place to stock up on fresh produce, meats, cheeses, even breads. The French also are more likely to patronize specialty shops (think cheese stores, patisseries) where food is prepared daily. San Francisco-based Imperfect Foods adds a sustainability element to eating healthily: this forward-thinking company (their mission is to eliminate food waste and build a better food system) will deliver fresh “ugly” produce to your doorstep—those slightly bruised, twisted or funky-shaped items that might otherwise end up in a landfill. 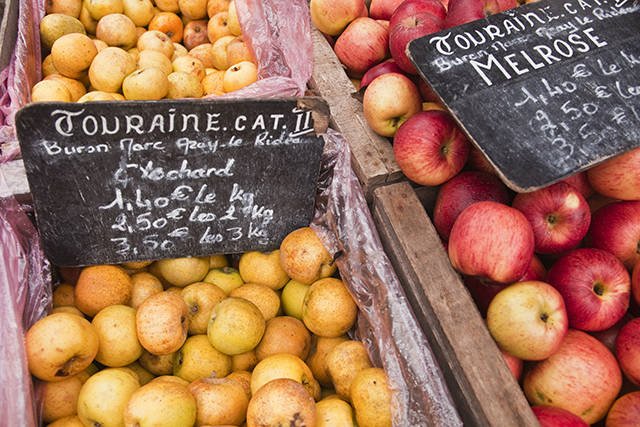 A no-brainer? Absolutely. While we all know the benefits of drinking lots (and lots!) of water, we sometimes need to make a mental reminder to up our daily intake. Try downloading the Water Minder app to help you log ounces, set goals, and track your progress. Also invest in a chic, environmentally-friendly reusable water bottle—more than just keeping H20 clean and cold, they’re also leak-proof, durable and well-designed (even ones that glow).

5. Cut Down on Snacking

Unlike in the states, you won’t find an abundance of sweet and salty snack foods (high in trans fats, sodium, and refined sugars and starches) in French groceries. And because meals themselves are inherently more experiential, it’s much less common to eat between them. When you do snack, opt for healthier choices like fresh fruits, vegetables, unsalted nuts, Greek yogurt, hummus, lean proteins and complex carbs. 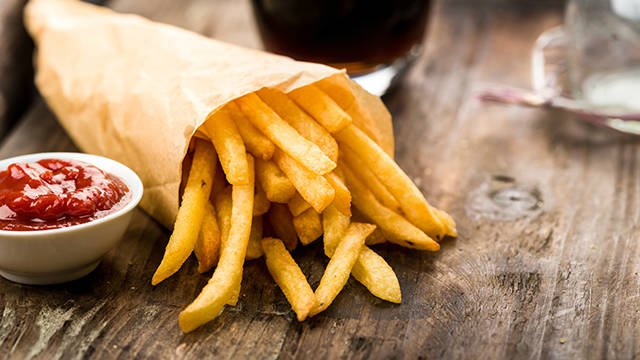 Can’t bear to give up frites? Invest in an air fryer, which provides the crispiness sans mess, fat and calories. Anything to make French fries healthier gets top marks in my book! 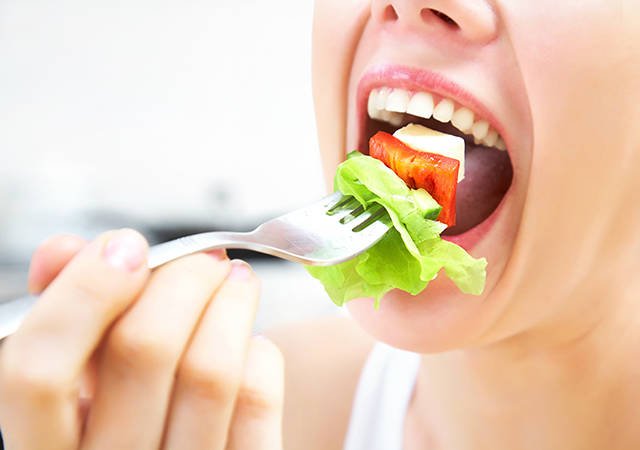 Tongue-in-cheek, this might mean eating only foods that can be consumed with a fork (au revoir, fast food burger). But in a truer sense, it means putting down your fork between bites to relish every flavor.

8. Learn from the Experts

In France, women don’t deprive themselves; instead, they adopt an easier, laissez-faire approach to eating. For Jeanne Damas, whose fashion-label-of-the-moment Rouje recently opened its first U.S. outpost in Los Angeles, it’s drinking liters and liters of herbal tea and water. French model Cindy Bruna says she trys to cook for herself every day when she’s home in Paris, sticking with fresh, natural ingredients. Model Miranda Kerr told Elle her tip for beating bloat is a daily spoonful of unrefined coconut oil to flush out the system and kick-start digestion. (Try blending it into your morning coffee—it may be helpful in speeding up your metabolism, increasing energy levels, and raising good cholesterol.) And Carine Roitfeld, former editor of French Vogue, confessed to Stylecaster that she doesn’t diet. Instead, the legendary fashion power player says her key to staying svelte is drinking green tea throughout the day and vodka at night. 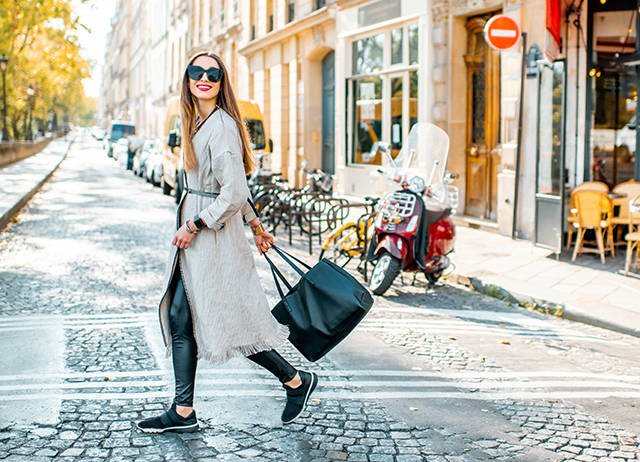 Parisians take walking for granted—most European cities are much better laid out for getting around on foot (not to mention public transportation). Set a goal for daily steps (mine is 10,000); then, park farther away from your destination, take the stairs instead of the elevator and visit a co-worker’s office instead of sending an email. Also add a brisk walk to your regular fitness regimen to up your overall cardio exercise. 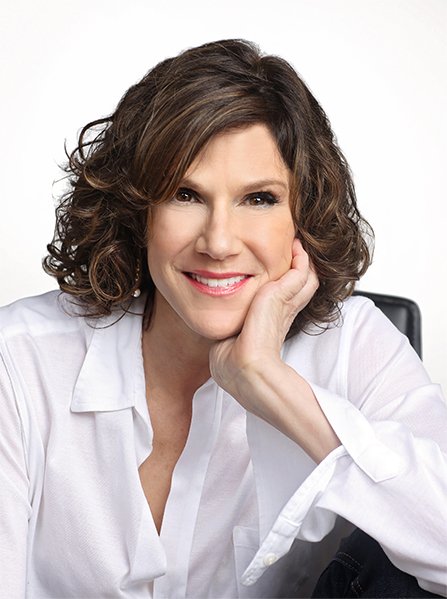 With 30-plus years of fashion and styling experience, Nancy knows what it takes to pull together a stylish, eminently-wearable wardrobe. Even better, she’s an expert at customizing selections to meet the individual needs of every client.

Suitcase Strategies: 5 travel-savvy tips for packing like a pro